Does the Netbook Have A Life?

The continued growth in cloud adoption may radically change netbook adoption rates. “As more organizations explore a virtualized desktop and cloud-based productivity options, the netbook could be an interesting conduit to a world featuring ‘Everything as a Service’ — providing traditional I/O to enable productivity tasks, but at a lower-cost, more portable profile,” explained Deloitte analyst William Briggs. 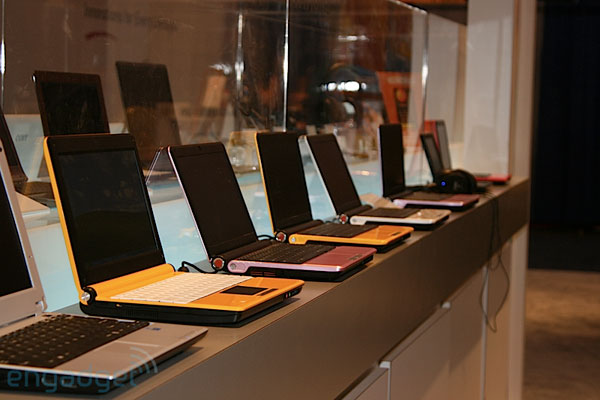 Trends have always come and gone, but when it comes to all-things-tech, the speed of change is faster than an Internet minute. It isn’t that tech users are all that fickle; it’s that the environment around them is constantly changing. Take the “smartphones vs. laptops war” for example. It isn’t that either won; rather, the war left the battlefield.

No one bothers to rant for one side or the other any more. By the time netbooks and tablets made a debut on the mobile scene, no one thought to ask which of all these devices would be the winner-take-all king of the WiFi hill. That’s because this is clearly not a strictly hardware contest anymore.

“The most important effect we have seen is that content matters more than screen size,” Brian Levine, president and cofounder of Innerscope Research, told TechNewsWorld. “A simple thought experiment would be this: Which is more engaging, CSPAN on a 3D IMAX, or “Avatar” on a mobile phone? Obviously, unless you are a political junky and don’t like the color blue, Avatar wins.”

Considering content is king and netbooks lack both the power of laptops for content creation and the appeal of tablets for content consumption, will they now disappear into oblivion?

The Story Told in Numbers

“Currently, there are about 40 million netbooks shipped in 2010, which is roughly three to four times more than tablets,” Intel spokesperson Suzy Ramirez told TechNewsWorld. “Since its launch, Intel Atom processors for netbooks alone have shipped more than 80 million chips with 100s of millions expected in the future. In fact, netbooks are one of the fastest-ramping consumer products ever.”

If one were to judge the popularity of netbooks and tablets according to media mentions alone, Intel’s reported numbers would appear suspicious. But no, independent sources do confirm that netbooks are outselling tablets four to one. To be precise, just over 11 million media tablets and 43 million netbooks will ship worldwide this year, according to ABI Research.

“Apple has sold a few million iPads in its first quarter, which is great for creating a new market,” said ABI Research Principal Analyst Jeff Orr, “but early adoption of media tablets is not outpacing netbooks.”

Indeed, tablet costs are a bit pricey for the average recession-battered consumer. “The iPad average selling price above US$650 isn’t driving mass adoption,” said Orr. “Competition, especially on price, is needed.” And so it is that netbook sales continue to climb, albeit at a slower pace than was predicted just a year ago.

“Nonetheless, 43 million netbook shipments are good growth — just not the meteoric pace of the past couple of years,” said Orr.

The Cloud as a Netbook Ally

Most of the criticism of netbooks is centered on its shallow performance compared to a full-sized laptop. But this drawback may disappear as the cloud grows larger. That could potentially mean that laptops, rather than netbooks, may fall by the wayside.

“Netbooks remain an interesting play for productivity tasks at a lower price point,” Deloitte Consulting director William Briggs told TechNewsWorld. “But full-featured laptops will continue to persist — basically until the cloud vision is fully realized, which is a number of years away.”

Enterprises have been lukewarm toward netbook adoption. Interest doesn’t appear to be growing despite the escalation in cloud adoption and desktop virtualization — two developments one would think would favor netbook use, as they leverage its lighter weight and cost while fortifying its processing and storage weaknesses.

Indeed, tablets are running into the same situation — slow adoption on the enterprise front. The tablets’ use-case is “almost entirely consumer-based,” reports ABI, and the enterprise market for tablets as a real replacement for laptops and smartphones is “virtually nonexistent.”

The continued growth in cloud adoption may radically change the adoption rates of both netbooks and tablets, although netbooks have a decided advantage in that regard.

“As more organizations explore a virtualized desktop and cloud-based productivity options, the netbook could be an interesting conduit to a world featuring ‘Everything as a Service’ — providing traditional I/O (keyboard, touchpad) to enable productivity tasks, but at a lower-cost, more portable profile,” explained Deloitte’s Briggs.

However, the cloud is unlikely to be an advantage of netbooks over laptops.

“As traditional productivity and enterprise technology suites persist, so will the full-featured laptop,” Briggs added.

Indeed, the cloud may not be a sufficient edge for netbooks, as the cloud will most likely power all devices more or less equally.

Netbook manufacturers, however, are not just sitting idly by to find out.

Between Tolerated and Banned

“Netbooks continue to see great momentum, and Intel expects this to continue with new hybrid and convertible designs planned for CES and throughout 2011, with examples such as the Dell Inspiron duo,” noted Intel’s Ramirez.

HP also recently released a line of “business” netbooks in an attempt to break through enterprise resistance in time to sync with cloud momentum. Apple (Nasdaq: AAPL) is pushing its new Macbook Air, which runs a full OS rather than a glorified smartphone OS, into the fold — even though it loses the price advantage of a traditional netbook in the process.

Enterprises meanwhile, are pushing back some on the commercialization of IT and blocking adoption on some of the newer mobile toys.

“Most organizations have created lists of blessed, tolerated and banned devices to help control the sprawl,” said Deloitte’s Briggs. “Netbooks today typically find themselves between ‘tolerated’ and ‘banned’ categories.”

How does such a classification bode for the future of netbooks in the enterprise? Turns out, it likely has no bearing at all.

“Consumer demand will drive the level and pace of netbook adoption,” said Briggs. “As tablet support has increased exponentially, based on the iPad’s sales, netbooks could achieve more strategic dispositions if stakeholders demanded it.”