Nerds Get No Respect At The Oscars 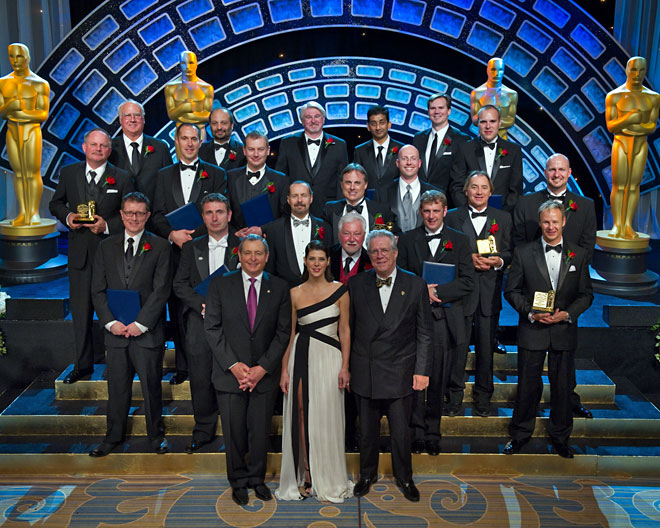 That might have been the upbeat theme of last night’s Oscars, where a co-host live-tweeted from backstage, ABC hosted an online party at Oscars.com concurrently with the televised ceremony, and a presenter made a scripted “app” joke.

But instead, those two words from James Franco were a deadpan reaction to the winners of this year’s scientific & technical awards, delivered in a faux derisive tone that could have come straight from the lips of Daniel Desario, the stoner character played by Franco in Freaks and Geeks.

Was it any surprise the Academy voters would favor a movie with upper crust Britons in Savile Row suits instead of one about teenage coders in T-shirts and hoodies who say things like, ‘He’s wired in’?

This was supposed to be the geeks’ big year at the Oscars. With young co-hosts Franco and Anne Hathaway hired to woo the wired demographic, and Facebook movie The Social Network a real contender for best picture, it looked like the nerds of the world — who have already staked out power positions in the highest echelons of the business and media spheres — were about to conquer Hollywood as well.

Not so fast, nerds.

The scientific & technical awards were relegated, as usual, to a ceremony that isn’t televised. During the big show, the technical awards segment is as big a cue for a bathroom break as the onstage appearance of the accountants who hold the winning envelopes.

Time to move away from the childrens’ table now that we’ve made them feel included: That seemed to be the real message of Franco’s squinty jab at the scientists and engineers whose inventions and software wizardry help bring movie magic to the silver screen.

The Academy loves an underdog from time to time — too much so for some industry types, who in recent years have boycotted their own party because big studio blockbusters don’t always win. This time there were arguably two underdogs: One was about Silicon Valley, unattractive overachievers and the digital age. The other was about prewar Britain, monarchs and people with the dreamy accents who always seem to win plenty of Oscars.

But on this night, the nerds would have very little revenge.

But that was one of only three Oscars won by The Social Network, which was nominated for eight. Jesse Eisenberg, who attended the awards ceremony with tousled hair and a necktie that made him look more slacker than movie star, lost to Colin Firth for Best Actor, and the film lost to The King’s Speech.

Film critic (and Twitter star) Roger Ebert saw it coming: “A British historical drama about a brave man struggling to overcome a disability and then leading his people into World War II looks better to the academy than a cutting-edge portrait of hyperactive nerds.”

Even screenwriter Aaron Sorkin — whose clippy dialog energized The Social Network, turning a potentially stultifying movie about coding and legal proceedings into a riveting portrait of an accidental billionaire — seemed to acknowledge the proper place of a nerdy wordsmith within Hollywood’s ecosystem as he picked up the Oscar for Best Screenplay.

“Roxy Sorkin, your father just won the Academy Award,” he said, ignoring the orchestra swelling behind him. “I’m going to have to insist on some respect from your guinea pig.”

iWeb traveled to London for “A Day of REST”, the first conference about the new WordPress REST API which was…

Secure from the start

Kieran O’Shea, open source enthusiast and author of the Calendar plugin gave a talk at WordCamp Edinburgh 2012 on methods…