Mozilla Firefox name and shame software developers who have developed extensions which on their scale are ‘sluggish’. 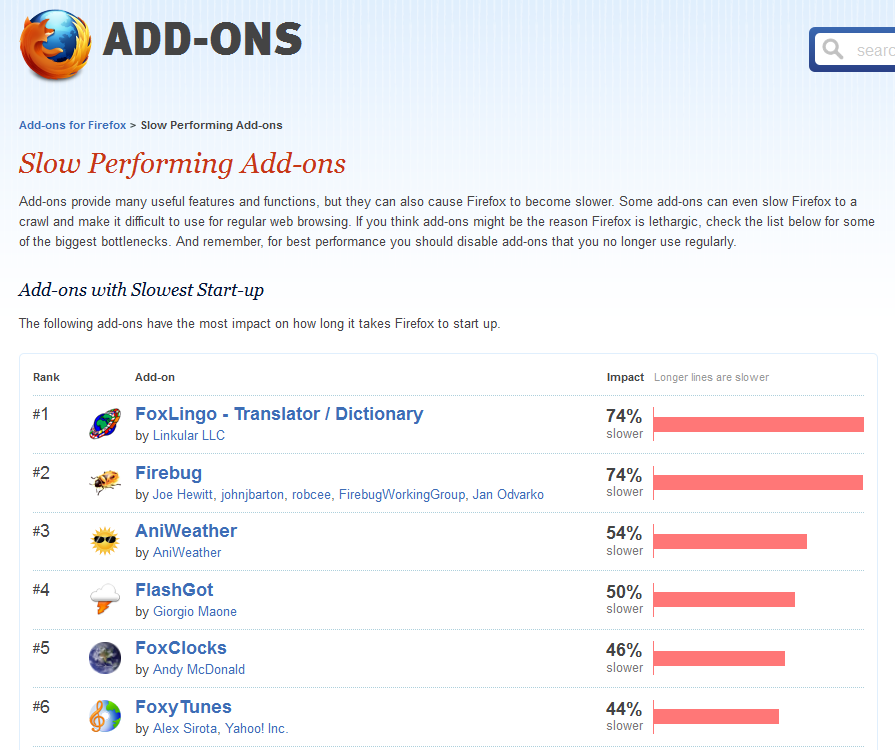 Mozilla has created a Hall of Fame for software developers who don’t take performance into consideration when developing extensions.  The browser-builder has named and shamed sluggish extensions in a rouge gallery.

Every week, Mozilla will perform automated performance tests on the top 100 extensions for its browser.  The ones that cause Firefox to shuffle along at geriatric speeds will be displayed on a Top 10 leaderboard. The current winner is FoxLingo, an ambitious translator and dictionary app that supports over 3,000 language pairs and 31 translations. Sounds good, but it will make Firefox 74 percent slower.

“On average, each add-on you install adds about 10 percent to Firefox start-up time,” says Mozilla product manager Justin Scott. “For some users that’s mere milliseconds, and for others it may be half a second; it all depends on the hardware and software of each individual.” In some cases, installing 10 extensions could double the browser’s boot-up time.

Publicly outing lethargic add-ons is just one part of a wider initiative to keep Firefox lean and mean, while still offering the browser’s raft of customisation options.

The company will also work closely with developers to keep add-ons running fast. It has updated its Performance Best Practices, and Scott says Mozilla has, “begun reaching out to developers of slow add-ons and asking them to work on performance.” A tool, where developers can get instant results on speed efficiency, will be made available in the coming months.

Google Chrome has become the industry leading browser for developers. The vast number of tools and extensions available for the software allow…

Mozilla To Have It’s Own Mobile Operating System

The creators of the Firefox web browser have started developing an operating system for mobiles and tablets. Although the project…