Arnstein kicked off by giving an overview of Metronet, a Norwegian firm which started out as a search company and evolved into an IT company. Metronet specialise in open source and have released a number of WordPress plugins to the community including three plugins paid for by the Norwegian government. Metronet see releasing plugins as their way of paying back to the community. “If it is useful for us and our clients it is likely it could be useful for other developers.”

Arnstein spoke of how open source is usually cheaper for the client, not only because there are no license costs. Metronet can utilise work others have contributed to the community which allows them to provide more value to the client. This advantage helps Metronet win projects when their competitors fight over a client, often offering the same licenced solution.

Arnstein handed over to Ryan who spoke about his history in WordPress development originally making plugins for himself and then for others.

Metronet Reorder Posts is one of the plugins we were most impressed with. Ryan gave the example of a meals on wheels style service where the site administrator needed to be able to change the order of dishes on a menu. The solution Ryan developed is incredibly easy to use, a drag and drop interface which automatically saves the new order via AJAX.

At iWeb, we have incorporated the reorder class into our framework allowing our developers to add the ability to reorder posts with ease. 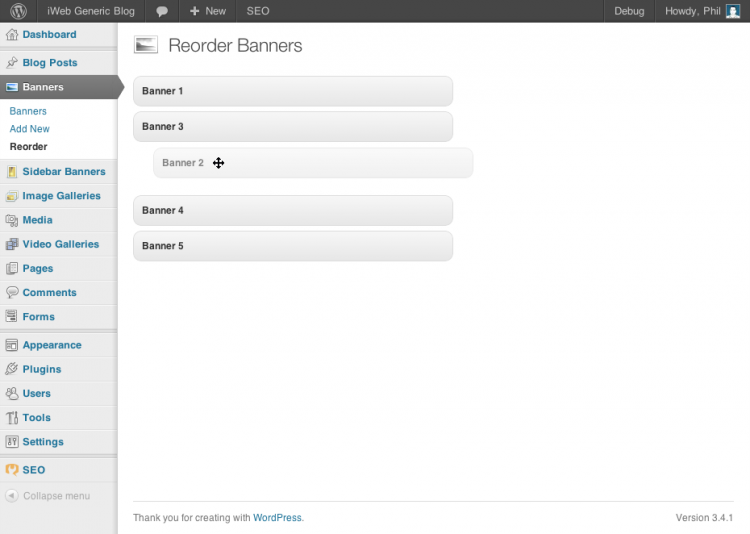 Ryan spoke of a number of other plugins Metronet have released, including Comment Errors and Unique Headers. He gave insight into his current work on custom registration/login and possibly providing a multilingual WordPress solution. This sparked discussion with the audience around BuddyPress and its capabilities for user registration and the various approaches one can take when developing multilingual WordPress sites.

The Custom to public presentation is on Slideshare, the Metronet Reorder Posts and Unique Headers plugins are available in the WordPress plugin repository.

I’d like to thank the speakers and Metronet for their talk and work in the WordPress community. Subscribe to our feed to keep updated with our WordCamp Edinburgh 2012 reports. And as always, remember that iWeb are web development specialists based in Staffordshire. Feel free to get in touch, or take a look at our portfolio of WordPress work.

Last week, we launched iWeb’s first plugin to the official WordPress plugin repository. At iWeb, we manage hundreds of WordPress…

Secure from the start

Kieran O’Shea, open source enthusiast and author of the Calendar plugin gave a talk at WordCamp Edinburgh 2012 on methods…