How Magento performance affects your sales

Magento is a great solution for ecommerce: out of the box it comes with a staggering array of features built-in, with thousands of additional features available through extensions. Everything from a simple shopping cart to complex business to business discounts can be configured quickly and easily directly within the Magento admin area, with no complex programming or coding required. On top of that, you can change the look and feel of any area of Magento using themes and layouts which makes it a compelling reason to use Magento as your eCommerce solution.

Sounds too good to be true? That’s the beauty of Magento. It was designed to be feature rich but all this excellent functionality comes at a cost and the price of a default, unoptimised, Magento installation is performance. Our tests show that on a reasonable virtual machine (2GB RAM, dual CPU, Linux Apache MySQL and PHP (LAMP) Stack) Magento can handle an average of 10 concurrent users before performance starts to noticeably degrade – not a great number for your busy eCommerce website.

The usual approach to improving the performance is to throw hardware at the problem. Adding more and more megabytes of RAM, faster and higher number of CPUs, faster hard disks – even SSDs – is a start and this will definitely show a marked improvement, but there is a limit to how far this will go. We’ve run a vanilla Magento installation on physical servers with 32GB RAM and 8 core processors and the concurrency barely went over 15 before a slow-down was noticeable.

How does performance affect my sales?

The simple answer is ‘dramatically’.

In this age of high-speed broadband people expect websites to load very quicky. An early study from usability guru Jakob Nielsen showed that users were prepared to wait up to ten seconds for something to happen before they lose focus and go off to do something else. That was the age of dial-up internet and a ten second page load was considered fast. A survey produced in 2009 brought that time down to four seconds.

Four Seconds. That is the same time it takes to read this sentence out loud.

The same survey went on to show a correlation between page load time and sales based on some of the the top eCommerce stores. The slower the website – the lower the sales. In fact, a report suggests that a 1 second delay in page load can cause a 7% loss in customer conversions. 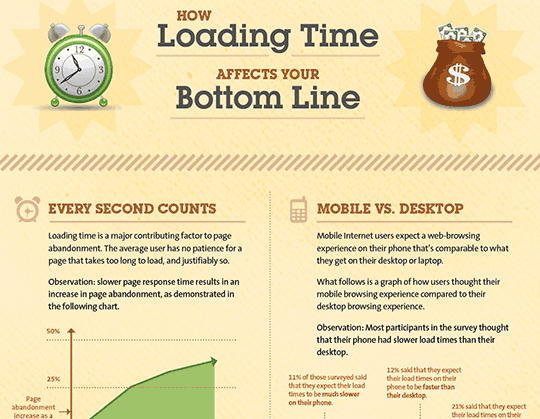 How Loading Time affects your Bottom Line Infographic from Kissmetrics

Nowhere is this more noticeable than on mobile devices such as Apple’s iPhone or iPads, or the plethora of Android phones and tablets. Mobile is very different to the desktop when it comes to user expectations as often a website is the only focus for the user on a mobile device and so performance is more noticeable. On a desktop computer the customer’s browser will most likely have a few tabs open – email, social networking, cat videos on YouTube for example and so the impact of performance is less critical.  Performance on the desktop is still very important, just not as noticeable.

It’s not just sales that are affected – search engines also take performance into account. Google has been using page load times in their ranking algorithms for a while now with the result that slower sites are given less rank than faster ones.  The result of this is that even though you may have better product and pricing on your Magento eCommerce store, if your competitor is faster they may rank higher and therefore get your sales!

What can be done to improve performance on your Magento eCommerce store?

Unfortunately, making your Magento eCommerce store fast isn’t straightforward.  Many parts of the system contribute to the overall performance such as the number of additional extensions and modules in use, the size of the catalogue and the number of assets (images, CSS, JavaScript and videos) used per page.

During our time working with Magento we have implemented a number of different techniques aimed at improving Magento performance. We have learned from each of the experiences and know where the strengths and weaknesses are in each technique.

Just throwing hardware at the performance problem is a solution that will only get you so far; eventually you will hit a threshold that no amount of hardware will break through.

Optimisations in the operating system and the web server stack are key to making large improvements to the performance of your Magento eCommerce store. Ramdisks, web server tuning, proxies and caches are all added, tuned, monitored, measured and analysed to identify and improve performance.

Magento was originally developed with a focus on features and it definately achieved that goal. Some steps to aid performance are included with Magento by default but these should be used with care. Turning on caching at the wrong time or failing to reindex after catalogue updates could leave you with missing product or incorrect pricing on your store. Knowing what to turn on, and when, is a skill acquired over time, with experience.

It’s not just at the server and hardware side that improvements are found. The biggest noticeable improvements can be found in the browser; less HTML, carefully designed CSS classes, optimal image sizes and efficient JavaScript all combine to make the browsing experience faster.  Serving static content from a content distribution network (CDN) can also have a dramatic effect on the performance of your Magento eCommerce store.

Nowhere is this more noticeable than on mobile devices. Automatic detection of mobile devices and output of mobile-friendly pages help improve the performance of your Magento eCommerce store, leading to an improvement in conversions.

Performance is a very important factor for a successful eCommerce store and we take it very seriously. With over 3 years experience developing, maintaining and hosting Magento eCommerce stores for a variety of business sectors we are  confident that iWeb are the best choice for your business.

Since our company was founded in 1995, we have been building fully bespoke eCommerce websites for our clients. We now…

Magento Inc. have recently announced their hosted Magento eCommerce service, Magento Go, will be shutting down on 15th February 2015.…