I was fashionably late to this years Magento Live and so my #MLUK15 started Tuesday on the train from Stafford to London and with, of course, a large tea and pain au chocolat to go. 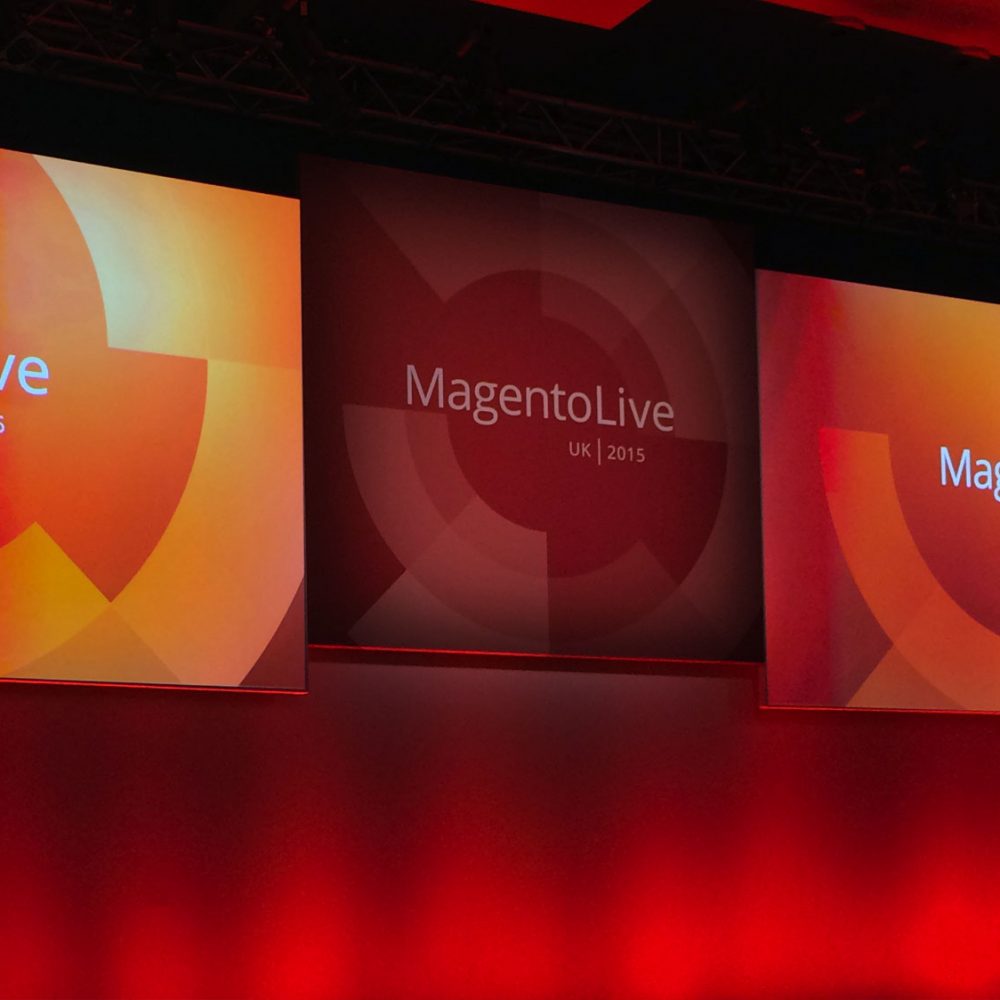 Fast forward 2 hours and I’m in the main hall with my new rucksack and bright orange lanyard, having a look round the stalls and chatting to some of the big players in the Magento community. Top of the days schedule was Pitchfest! (Westminster 2, Level -3). These were quite fun to watch, presented with the challenge of an elevator ride to pitch their product or technology to the audience, each of the sponsors had 90 seconds.
https://twitter.com/RebeccaLTroth/status/613262030804549632
A great pitch from SagePay on how to seamlessly integrate payments online and in-store.

Startup Success (Westminster 2, Level -3) Hosted by Ryan Thompson, Head of Small Business at Magento. We heard from 3 startups about how they became breakout businesses.

Oliver Tezcan, The Idle Man, shared his personal experiences from when he first set up The Idle Man and had some really great advice for startups. He also included all the things he would do differently in hindsight.

If your first product is perfect, you are too late.

This really hit home and is such an important message because I see too many startups get so hung up on the tiniest details that they loose sight of the bigger picture.

Some great startup advice: If your first product is perfect, you are too late. #MLUK15 pic.twitter.com/VAZAQgUV9Y

Mark Bennett, Christopher Ward, told the story of Christopher Ward from 3 men on a boat with an idea, to having a mountain named after them! The premium watch industry is not easy to conquer (see what I did there?) but Christopher Ward have been having great success since they launched with their first watch in 2004.

In the Magento community, ebizmarts are very well known for their SagePay & Mailchimp plugins and now also for their Magento based POS system.

We heard from Ignacio about how the company started like many other eCommerce design & development agencies, saying yes to anything and everything and worrying about the how later. Until in 2008 they drew the line and learnt to say no, transforming the company from a service provider into a product supplier for Magento. There was a lot to learn from the ebizmarts journey for existing eCommerce agencies and anyone thinking of starting.

Soaking in the knowledge of the Startup Success Panel with @Idle @ChrisWardLondon @ebizmarts #MLUK15 pic.twitter.com/jxrZ2Zs1O5

Casually sitting, waiting for the first General Session to begin, when up pop some of the iWeb team at the opening night networking event on the big screen!

Some of the iWeb team on the big screen at #MLUK15 @iwebtweets pic.twitter.com/7wypNJOdsQ

General Session I (Westminster 2, Level -3). Kicked off by Ben Pressley, Head of Worldwide Sales, we heard some great facts and figures about Magento and the world of eCommerce from some of the top dogs, including the EBay enterprise president Craig Hayman.

The UK are the global leaders for Internet sales per shopper. #MLUK15 pic.twitter.com/3AJBpgYkpj

The EBay enterprise president @chayman on the fundamentals of commerce and consumer shopping journeys. #MLUK15 pic.twitter.com/41hnnLjqP4

As part of this general session, we heard from Gordon Henderson at AXA. Considering insurance is boring (he said so himself) this was one of the most entertaining talks I saw. I have put a few quotes and tweets from during his talk below…

80% of people are diagnosed with cancer in A&E when it's too late.. What can we do to change that. #Innovation Gordon Henderson @AXA #MLUK15

"Insurance: something you don't want to buy & when you use it, something shitty has happened" #MLUK15 #manfromAXA

Two of these people are on the phone to each other. Can you guess who? #MLUK15 @NeilBoughton @p3mbo @gazjoy pic.twitter.com/S435hSFfjb

Breakout Sessions I (Westminster 2, Level -3). Winning Hearts and Minds: Best Practices from Customer Experience All-Stars… I will be honest, I missed the first half of this session and they did not win my heart or my mind in the last 15 minutes unfortunately…

Breakout Sessions II (Plaza 3, Level -1). Kath Pay, cloud.IQ. Finding the Right Balance: Creating a Successful Customer Journey… I loved this talk! It was super insightful and super engaging, so much so that I did not tweet at all until it was over which, for me, is saying something. A longer version of this talk is available on cloudIQ, and you can get access to it here: How to Create a Persuasive Customer Journey by Kath Pay. Go check it out!

Meanwhile Andrew Pemberton, one of our Magento Developers, was downstairs at the SagePay stall…

Breakout Sessions III (Plaza 3, Level -1). Jan Andersen,  StoreGecko. Powering Growth through Product Information Management (PIM)… Very interesting and true talk about the power of PIM in eCommerce. Jan raised some really important points and had a great vision for the future that we should all be thinking about. It is definitely worth having a look into Product Information Management if you haven’t already.

CEO @GeckoVoice: The dirty secret about Product Info Managment: We do it already, we just don't call it PIM. We just call it work #MLUK15

General Session II (Westminster 2, Level -3). Welcomed again by our Master of Ceremonies, Ben Pressley we were entertained with more facts and figures about just how much Magento dominates the eCommerce market, as well as an lovely movie on Hornby and how Magento has worked wonders for them.

@RebeccaLTroth: @chayman sharing some of the worlds most innovative brands that are using @magento #MLUK15 pic.twitter.com/3b2C2rfdnx

@ProductPaul: Magento 2 on track for the Q4 2015 release #MLUK15 pic.twitter.com/fGcw3czYy5

So that’s my version of events for Magento Live UK 2015, I hope you enjoyed reading about it half as much as I enjoyed being there!

It's been great @magento! #MLUK15 pic.twitter.com/Mx4xU0X0y5

This week we are at the Magento Imagine 2016 conference in Las Vegas. The first Imagine conference started 5 years…

Since our company was founded in 1995, we have been building fully bespoke eCommerce websites for our clients. We now…

On the 19th April I made the long trip from Manchester UK to Las Vegas. My destination was the Magento Imagine…