iWeb joined over 150 attendees for WordCamp Manchester 2015. WordCamps are events held all around the world. They’re aimed at designers, developers and users of WordPress. Community is one of the greatest aspects of WordPress. A WordCamp is a great place to meet, learn and develop with other WordPress folk. 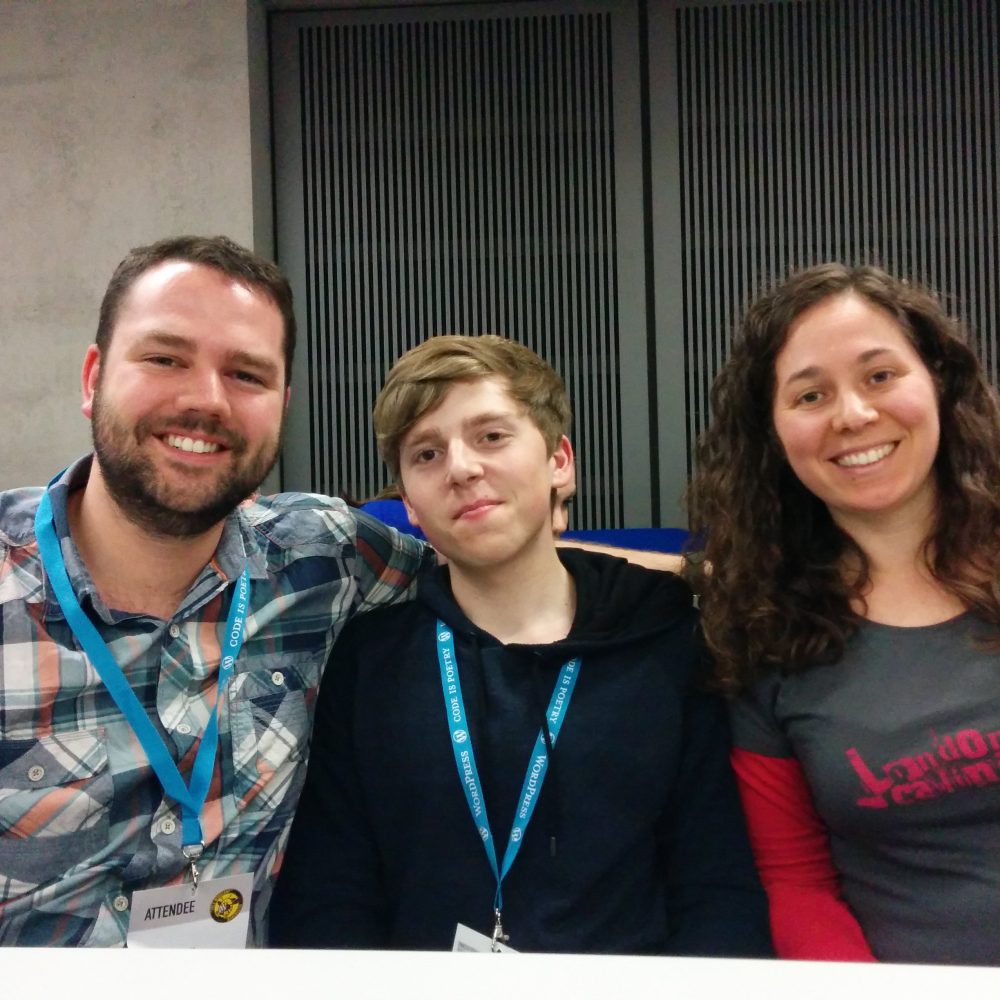 The organisers of WordCamp Manchester 2015 did a great job organising a two track conference day, covering both technical and non-technical, editorial talks.

It’s a fast paced industry. At iWeb, we make an effort to get out in the community, both attending and supporting events in our space – Magento and WordPress, as well as general web meetups and conferences. This weekend we’ll have a presence at two conferences – Mage Titans is a Magento conference in Manchester and WordCamp Cantabria 2015 in Santander, Spain!

The conference day was held at Manchester Metropolitan University’s Business School building. The university kindly donated the venue. The building was certainly impressive and we took the opportunity in-between talks to explore a little. Not one for those who suffer from acrophobia, it was from the top, looking down, Jake came out with his best observation to date…

My laptop would break if I fell down there. 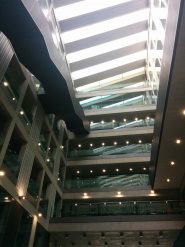 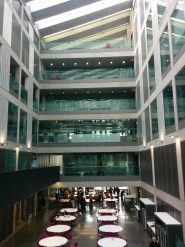 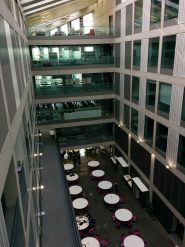 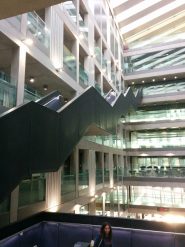 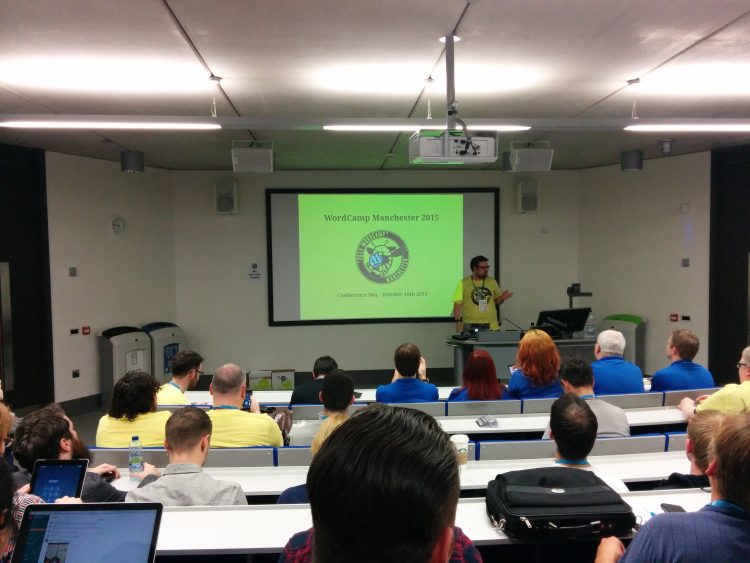 We mainly stuck to the development track, until the end of the day where we split up with a couple of us moving to see the lightning talk session. We’ve picked out some of the talk highlights below. 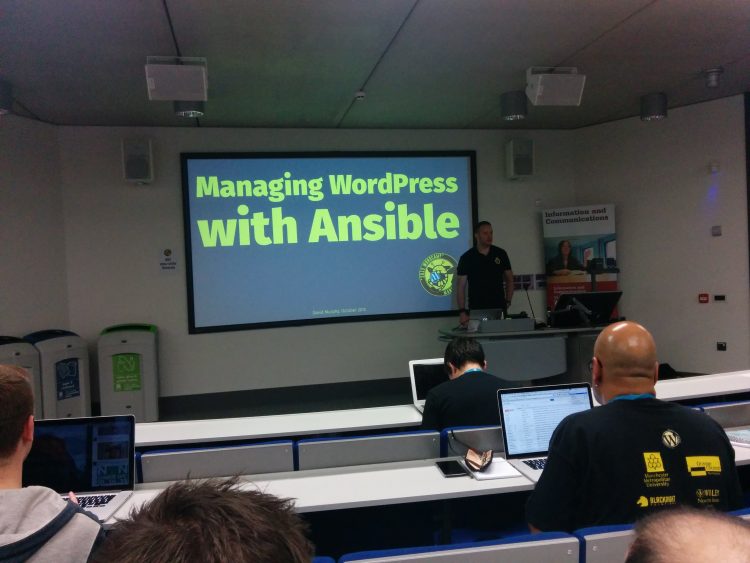 David delivered a smooth talk, covering his preferred development stack. He moved on to introducing Ansible, an automation tool which can be scripted to build WordPress environments. He demoed an example of this setup which went through the process of installing server packages, setting up a database, downloading WordPress, automatically creating a configuration file and making sure the server is up and running. 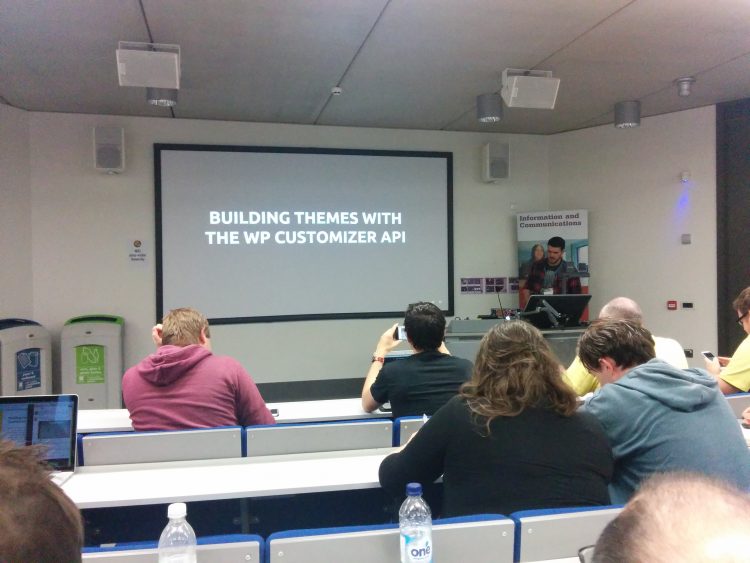 The Customizer in WordPress is a fairly recent introduction, it’s an interface in WordPress which shows your live website along with a panel of controls which can be used to make modifications to the look (and in some cases, the content) of a website. Dave gave some background to where the Customizer came from. In a world ravaged by the theme arms race, of bloated theme option pages, the Customizer was born to standardise and improve the user experience of theme configuration.

Dave’s talk walked us through the process of registering controls before moving on to a live demo, showing the power of the Customizer, using controls to update a websites appearance in real time. 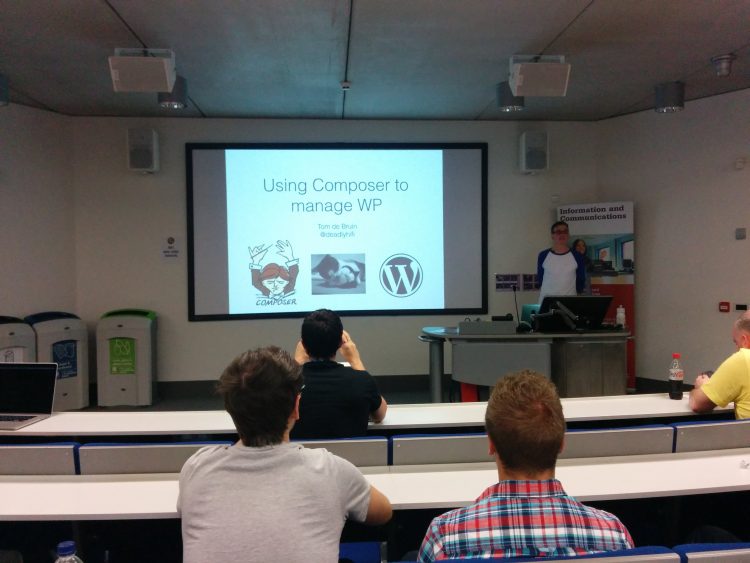 Composer is a dependency manager for the PHP programming language. It’s used by projects to define which third party libraries need to be pulled in. Managing third party dependencies allows for easier updating, locking down to specific versions and removes third party code from your own projects version control.

VPS hosting for speed and security 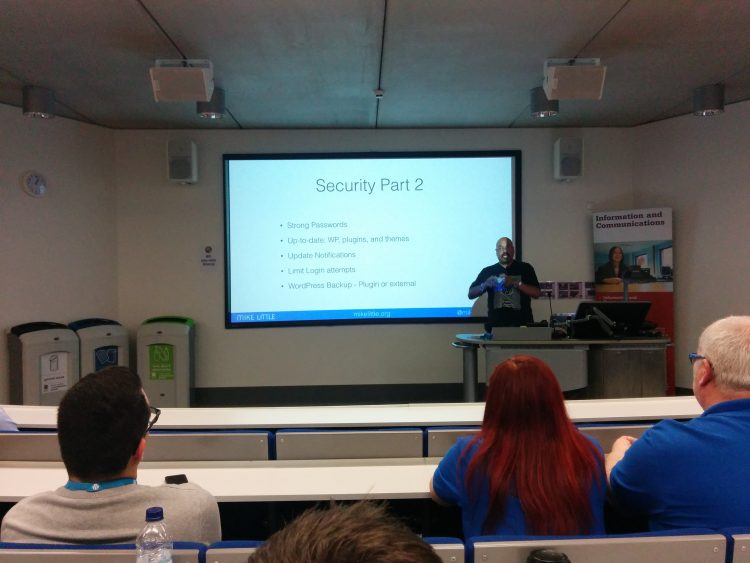 Mike’s talk covered the setting up of servers for WordPress. He went over the different types of hosting available for WordPress including shared, dedicated and VPS. He went on to introduce a number of VPS providers including Digital Ocean. The talk was particularly interesting for us developers who rarely consider the hosting side of WordPress. Mike covered the server software stack and looked at a number of security hardening techniques on both the server side and from a WordPress point of view.

20 ways to improve the experience of content editing in WordPress 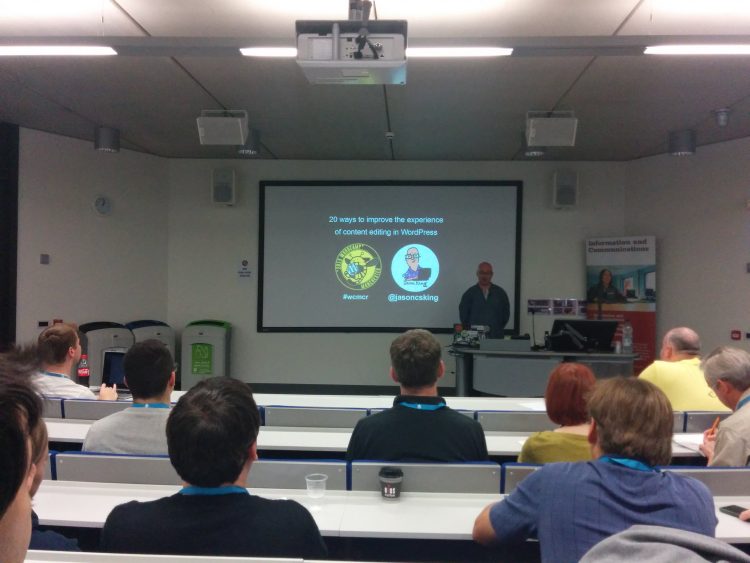 Jason’s talk was based around his experience improving the user experience of the WordPress dashboard for his clients. He looked at a number of snippets for the WYSIWYG editor, main dashboard screen as well as a number of existing plugins.

Some of his suggestions included removing the heading levels which are not used by a theme, removing rarely used dashboard widgets as well as adding your own dashboard widget to promote website support services. 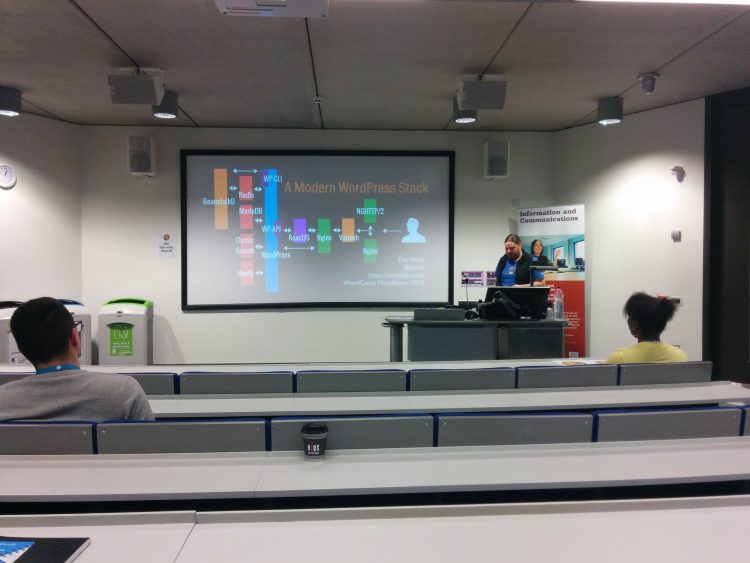 Tim’s talk introduction was so good, we got to see it twice! After the false start, the talk went on to cover various technologies which can be used to enhance WordPress. For example, using an in-memory cache such as Redis for transient data. In-memory caching is more performant than retrieving information from a database, increasing website speed and allowing a web server to operate at a higher capacity. Tim is a confident speaker and his talk was packed full of useful information, including an anecdote about how caching can and will screw with you! 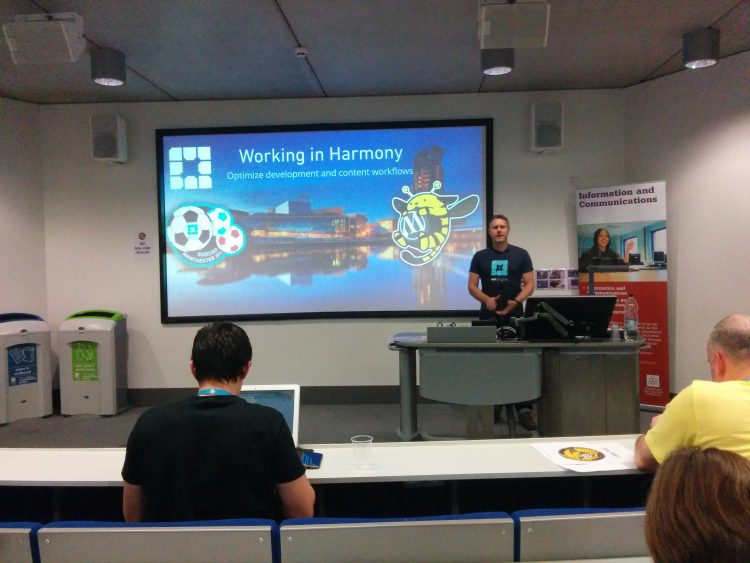 Edmund’s talk focused on a number of ways to handle both development and content workflows. Moving code between local, staging and production servers as well as options for content editors for moving content from a word processor such as Google Docs to a staging site and finally, production. Of particular interest was RAMP and VersionPress.

Failure to prepare is preparing to fail

After the conference day concluded, we set out in search of sustenance to power us through the afterparty and the journey home. We had been tipped off about a burger restaurant in the Northern Quarter. We reached Almost Famous and were faced with an hour’s wait! Wishing we had planned ahead and booked, we left disappointed and wandered back towards the afterparty venue. We came across a Pizza Express and grabbed a pizza and carbonated beverage.

The afterparty was held at HOME, a trendy cinema/arts space a short walk away from the conference venue. There was a light buffet and a few free drinks vouchers going. We met up with a number of familiar faces from the WordPress Birmingham UK meetup crowd. 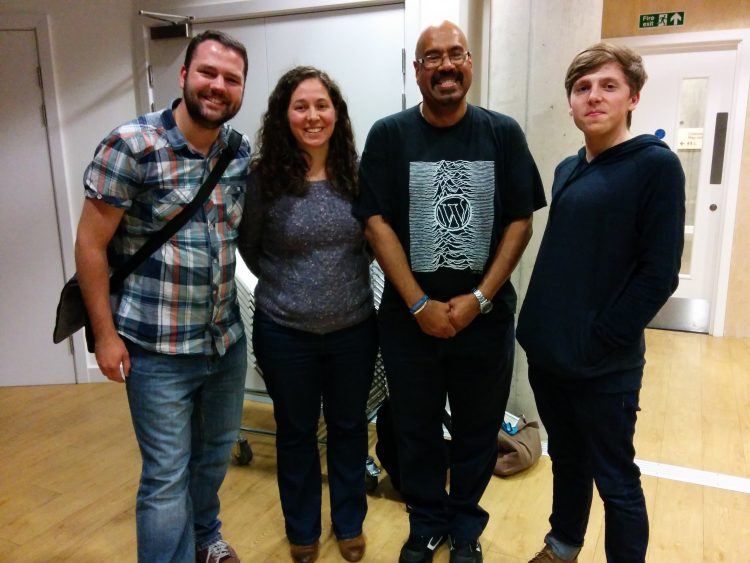 There was just time before heading off to have a quick photo with Mike Little, the co-founder of WordPress.

So caught up in the WordPress bubble, we had missed the fact there was a Rugby World Cup match in Manchester that evening. This caused a little panic as we tried to catch the last train home. Surrounded by police, we joined a crowd of a few hundred people attempting to get into Manchester Piccadilly station! We just made it on the packed train home, squeezed in with a number of rowdy rugby fans.

Apart from missing out on Almost Famous… we had a great day. Saw some fantastic talks and met great people. Credit should be given to the organisers and volunteers for putting on such a well organised conference day. We’ll see you next year!

WordCamp London has come around fast! We’re travelling down Friday evening, so we can be ready, bright and early on…

Our team headed down to London last weekend for WordCamp London 2015. A three day event split between a contributor…

iWeb have been attending WordCamp London since its inception back in 2013. We certainly weren’t going to miss this year’s.…