Previously known as the Kitchen Sink, but now simply as the toolbar. The toolbar contains a number of additional editor formatting controls. Unfortunately, this extra row of controls is hidden by default for new users. We’ve written the following solution which sets the preference for new users, so that the toolbar is visible by default. 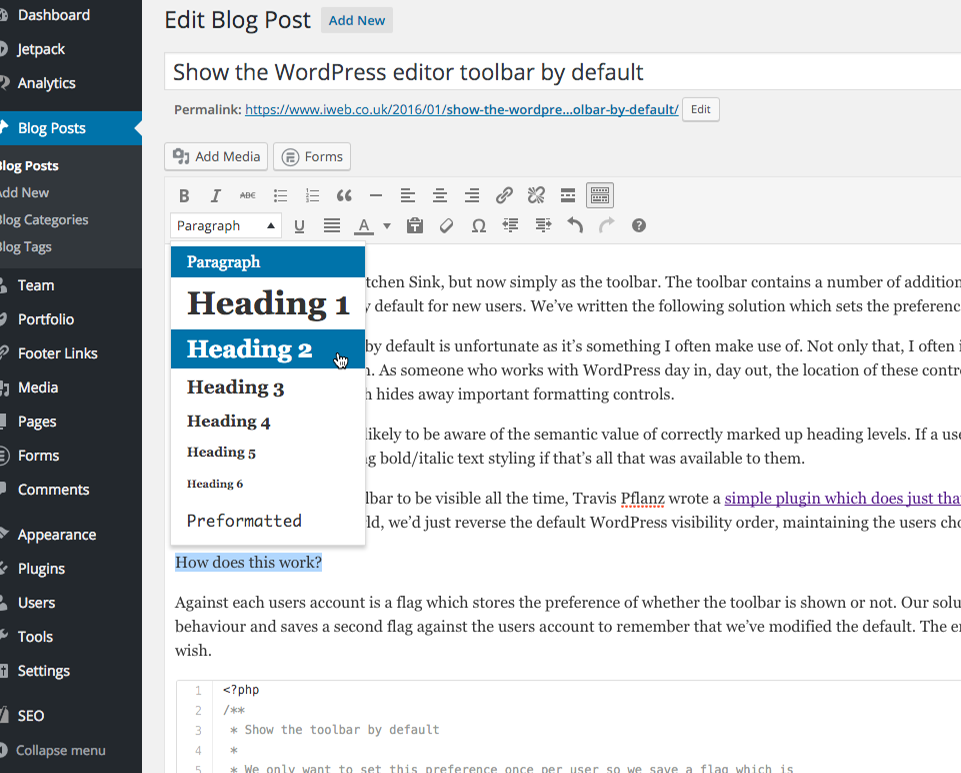 Having the toolbar hidden by default is unfortunate as it’s something I often make use of. Not only that, I often instruct others to use some of the controls, in particular the heading level dropdown. As someone who works with WordPress day in, day out, the location of these controls is second nature. However, for inexperienced users, it’s an additional step which hides away important formatting controls.

Users of WordPress are unlikely to be aware of the semantic value of correctly marked up heading levels. If a user is provided with insufficient training, it’s difficult to fault their ingenuity in using bold/italic text styling if that’s all that was available to them.

Correctly marked up headings have meaning in terms of defining the order/outline of content on a webpage. Heading levels help develop an understanding of where a section lies within a wider context. Headings are useful in terms of accessibility, for example, screen readers can give a user the option to skip to the section of a webpage which is relevant to them. Search engines also make use of headings. Naturally, headings contain important keywords and give search engines an understanding of the content on a webpage.

If you want to force the toolbar to be visible all the time, Travis Pflanz wrote a simple plugin which does just that. However, this plugin prevents the user from closing the toolbar. In an ideal world, we’d just reverse the default WordPress visibility order, maintaining the users choice to hide the toolbar should they wish.

Against each users account is a flag which stores the preference of whether the toolbar is shown or not. Our solution changes the preference, reversing the default behaviour. We then save a second flag against the users account to remember that we’ve modified the default for this user once already. This ensures the user can choose to hide the toolbar if they so wish.

Feel free to make use of the above code within your WordPress project. We’re considering wrapping this up into a plugin so that it can be installed directly from the WordPress plugin repository.

The aim of SEO (Search Engine Optimisation) is to boost your websites position in search engine result pages. Coming up…

LinkedIn, Ashley Madison, Yahoo! and Mossack Fonseca… what do these companies all have in common? Large-scale data breaches have received…