Last Saturday 12th November myself and eight of my teammates donned our iWeb hoodies, packed our rain macs and headed up the M6 / West Coast Main Line for the 3rd Mage Titans Manchester 2016 conference.

We had a good cross section of the team representing:

By the end of the day I think it’s fair to say we all felt in a similar state of mind.

But come Monday morning and a quick glance at #MageTitansMCR it was great to see the after-glow of the conference and the huge amount of energy and ideas emanating from the community.

What did we take out of it? For a start, lots of notes! So, in the interest of community contribution and collaboration, here they are. It’s a mixed bag of perspectives with notes from a few different team members but hopefully they serve to provide some further food for thought. If you’ve got anything to add or would like to ask a question, feel free to drop us a line on Twitter (handles included below).

Vinai Kopp – Stories From the Other Side

Fabian’s process was divided into a number of steps: 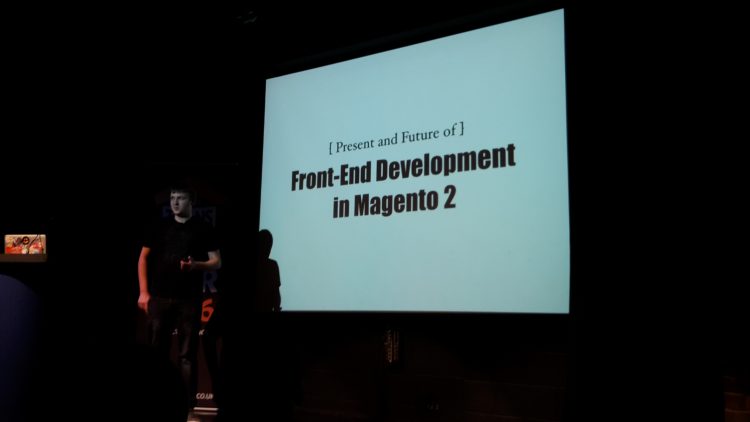 The first example  was a block that displays the opening times on the footer of all pages.

The second example a was a ‘My Favorites’ section that is personalised to each user.

Max discovered that not many people were looking into or blogging about Magento 2 front-end development.

You can do your own thing with Magento 2 front-end. If you can do that, why have a front-end framework at all? Magento loves the mom/pop shops. Some customers optimise for longevity rather than coolness.

S: Single Responsibility – A class should only do one job
O: open/closed. – objects should be extensible, but closed for modification: use interfaces, abstraction etc.
L: Liskov substitution principle – “objects in a program should be replaceable with instances of their subtypes without altering the correctness of that program.”
I : Interface Segregation A client should never be forced to implement.
D: Dependency Inversion Principle. 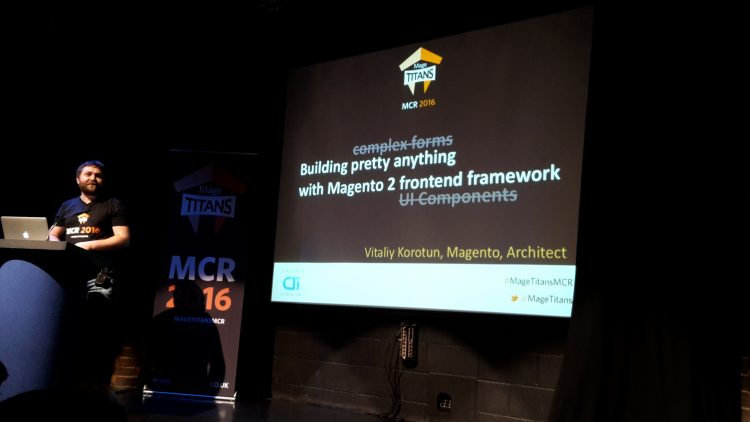 Vitaly attended the previous day’s hackathon where he realised that a lot of the content in his planned talk was outdated or invalid. Therefore he modified his talk to:

“Building pretty much anything with Magento 2 Front-end components”

An in-depth breakdown of the reason for the topic change can be found on Andreas von Studnitz‘ post at https://www.integer-net.com/reality-adjustment-why-a-talk-about-ui-compontents-changed-scope-and-title/.

How does Fabrizio handle switching to mysql master/slaves?

Use CNAME to switch to master/slave.

How do you rollback if something fails?

For critical CI deployments do not destroy previous build. Blue green deployment. Use N98 Magerun to deploy DB changes, via a Magento worker that processes updates/upgrades.

Max Pronko used to work at Magento but now works internally at The Irish Store (https://www.theirishstore.com)

The Irish Store is a season business, doing 95% of their annual turnover around Christmas time. Their existing site was launched in 2013 and had 4,000 products (around 1,000 configurables) and over 500 categories.

After 8 months of development, they have recently launched their new site on Magento 2. They wanted to upgrade to Magento 2 to improve all of the ‘touch points’ for their users (packaging, emails, website, tone of voice, brand).

The plan was to start the project in January 2016 and finish in August 2016. During the project the workload increased dramatically, the team also had to fix a lot of M2 bugs themselves. As the workload increased they used SCRUM and worked in 2 week sprints with daily stands up to get the basic functionality working with a plan to add features in later sprints. During the data import they found that they needed to exclude more columns than they needed to include so decided to do a manual data integration.

They installed 13 third party extensions but 1 only passed their internal QA (Realex Payments), the rest failed.

Their internal targets for the site were multi-availability, 99.9% uptime, 3 second page load time and able to handle < 300 orders per day.

They had to change their AWS (Amazon Web Service) hosting from 2 servers (1x site, 1x db) to 5 servers with load balancing. They also use tools like New Relic, Pingdom and Webpagetest to keep an eye on their Magento store’s performance.

They assume that Magento 2 releases will be every 3 months. Performance testing that they do is based around number of orders, as that is the main point of the site. They expect more features in Magento 2 and due to the documentation they expect the client/merchant to pick up and use these features. The infrastructure of a site should be thought about at the start of the development process, so you know what will need caching, etc. 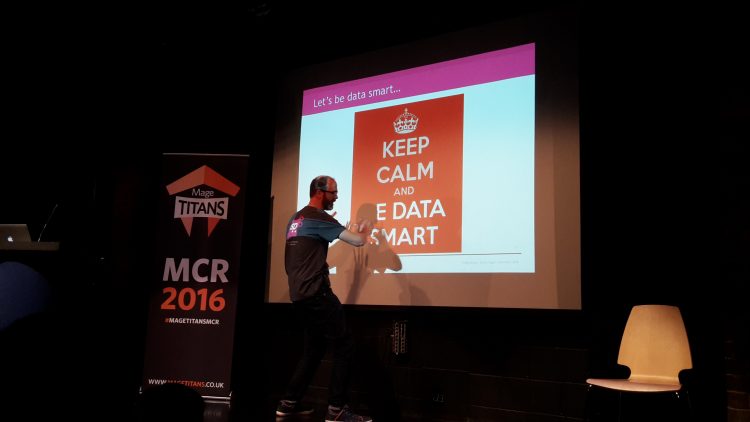 Irish. Tadhg is a Magento Lead Developer at Screen Pages.

They used the built in Magento import tool to import the data across, he said the key was in the prep work, using third party extensions where possible and lots of dry runs.

After getting errors on the data import use the map.xml file to fix data.

Rebecca Troth- Magento is for Life, not just for Christmas

The talk was about the importance of keeping Magento up-to-date. After the initial “warm up” Rebecca gave us some stats on Magento sites and what version they are running, worryingly there are 11 sites out there still running Magento 1.2!

Some agencies treat Magento sites like a factory production line, running sites off and then never updating or evolving those sites.

A new Magento site is a lot like having a new puppy (Max): they require daily attention, daily updates to content, products, banners and CTAs help with their SEO performance and help with keeping customers engaged. It is also import to keep the hosting platform up-to-date to allow Magento to perform to it’s full ability.

Training merchants to use the platform is also crucial in getting the most out of Magento. When updates and patches are released, we should make sure that these are rolled out and not ignored. Max 2 promises to make this process less painful with the updates on the second to last slide.

Take away: give your Magento plenty of love, care, and attention to get the best out of it.

Magento 1 API import was really slow. Magmi import can throw up errors. The best way to import data was through the Import/Export feature in the admin, importing data via a CSV.

Magento 2 uses the same SOAP/REST API but it is slow, the Import/Export feature is still the better way to import but it’s not automatic. It does now support external images though. There are 81 fixed columns in the export, no matter what data the user decides to export. Multiple attributes are exported in a single column, delimited by a vertical bar with the values of that attribute delimited by a comma.

There are automated CSV import extensions out there that extended the M2 import/export feature. The one referenced was: https://firebearstudio.com/the-improved-import.html

Jason is Vice President of Technology at Magento. He is responsible for engineering, quality, operations, PMO, user experience, design and technical documentation. If you find a bug in Magento it’s his fault! He is “rubbish on Twitter”.

Jason talked about the community engagement from Magento and the need for it to improve. He acknowledged the excellent community that Magento has, which is backed up by the 6,000 contributions to Magento 2 through github.

When they launched Magento 2 Merchant Beta should have been non-production even though it was put on some production environments, this lead to Magento 2.1 being an RC (Release Candidate) and was specifically for development purposes only, non-production! Magento have also got the Magento 2 B2B to the Alpha stage now, so they are looking to work closer with agencies and merchants. It is the first time Magento have released code before the MVP product. They are hoping to release code before all features are completed, this would be for non-production deploy so that extension developers can see the majority of the core updates and work with them, without waiting for the full official release, it gives them a headstart.

Jason said that Magento have learnt lessons from the SUPEE-8788 release and are looking to work closer with the community.

If you need a further fix of Mage Titans, check out their YouTube channel.

It was also great to hear that Mage Titans have raised £5,300 for worthy causes to date, with this year cause being the Royal Manchester Children’s Hospital.

Roll on 2017 when Titans continues the roadshow in Milan, USA, Mexico and Manchester once more.

A truly rewarding day for all involved!

Last Saturday, on the 11th of November, the iWeb Magento team braved the frosty morning air and hopped on a…

The time is nigh. After weeks (ok, months) of counting down, Magento Imagine 2017 kicks off in Vegas on Monday.…